skip to main | skip to sidebar

That's right, my little peanut is in 4K. She just barely made the cut off, so we're just going to see how it goes and reassess in the spring whether she is ready for Kindergarten or if she will do 4K again next year.

So far, she loves it, which is amazing. She's been in a three year old preschool program in Georgia and also was in child care while I was working this past winter/spring. Neither one went very well. She would be fine for about a week and then start to get really sad. It was heart wrenching.

These days when I ask how school went she says "I loved it." in her little four year old way. Heart melting is much better than heart wrenching!

Labels: Fuzz, growing up too fast

Holy smokes, it's been almost nine months since I have posted. I haven't taken the time for blogging and I'm not sure why. Busy living life instead of writing about it I guess. I got to the point that I was writing for the feedback and connection with others. Now, if I continue, it's for me.

I just had a birthday earlier this week, and I certainly didn't think this is where I would be in life at this point. I was always a great student, graduated college with an excellent GPA, and felt like the world was my oyster. Had a couple jobs out of college, and then the Army and building a family kind of took over. Here I am, 29, unemployed, and struggling to find a good job despite my education and life experiences. I got sad about it for awhile. Disappointed in myself, feeling like I was a disappointment to my family.

Life is all about choices though, isn't it? It was my choice while Zack was in the Army to raise Karsyn full time. During his deployment, I wanted her to at least have one parent around all the time that she could count on. When he got back from his deployment, I enjoyed taking care of our whole family. I liked being there on the occasional day that he got out of work early. I enjoyed taking Karsyn to story time at the libraryand to the park with our neighbors. It was wonderful to be able to pursue my photography and start my own business.

When you're out of the traditional workplace for four years, it's tough to find a job, even though life has taught me so much in those years. However, when I think about the choices I made that got me to this point, I have no regrets. I started to think about my life on a grander scale. I have an amazing husband. I have a beautiful, smart, funny, and outgoing daughter. And I like to think she is who she is, at least in part, because I was with her during those years.

I am blessed. I have what many people dream of. I will take my little family over a successful career any day of the week. I am still looking for a job, I need one, but it doesn't define me.

This is what does: 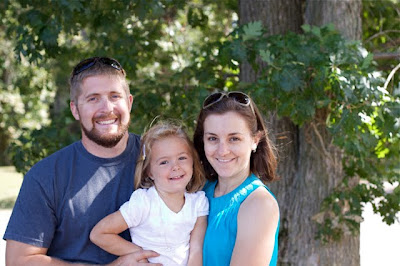 Well, Stryker is no longer a Stryker. He is officially out of the Army. We are back in Wisconsin, and our front yard currently looks like this: Apparently we're going to possibly have 18 inches before it's all said and done.

Much more to come, as this is proving to be a bit of a scary transition.

She talks to cakes.

I am happy to report that Fuzz didn't have any adverse effects from the shot. Unless you count being extra sassy for the last couple days an adverse effect.

Today, we're having a little cookout to celebrate her third birthday. Um, excuse me, who told her she could get older?? I made an exchange with another local business to swap a cake for a photography session, and we picked up the cake this morning.

She keeps talking to the cake and running into the room yelling "Cake time!"
Nice try Fuzz. 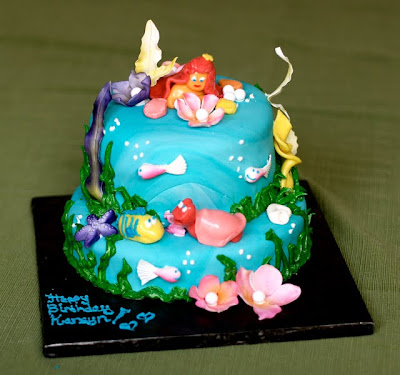 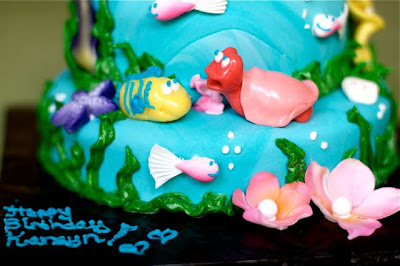 I am so mad at myself.

Today was Fuzz's three year well child doctor's appointment. She was such a big girl, did everything the doctor asked her to, and everything checked out fine. Then the doctor told me that she needed her second Hepatitis A immunization. I am not anti-vaccination by any stretch, but when she had that shot last year, she had a reaction to it. The day after she received it, she woke up and her leg was close to twice as big as it should have been.

Initially when I went in today I thought that the shot that gave her that reaction was the one for chicken pox, so I had it planned that if they wanted to give her that one again, I was going to say no. I mean, it's chicken pox. I've had it, you've probably had it, we're all still kickin. She had already had one of the series, if she ended up getting chicken pox, it would probably be a minor case, I was ok with that decision. When I realized it was the Hepatitis A one that gave her a reaction, I wasn't so sure. Hepatitis seems more serious to me than the chicken pox.

Either way, when I started to tell the doctor that she had a reaction to that shot last time, she started interrupting me. I told her again that she had a reaction, and she says "So you don't want her to get it then?". Perhaps she didn't mean it to sound like that, but to me, that's what it sounded like. I asked her if perhaps they had a different version of the shot they could give her and she totally brushed her reaction off saying "well that one doesn't usually give a bad reaction, maybe something got in it or maybe they hit a blood vessel or something." She then wouldn't give me my paperwork until she had the shot.

So, basically, I let the doctor bully me into getting the shot for Fuzz.

I'm mad at myself, because she actually ended up having to get two shots today. One that she's had before and done fine with, HIB, and the Hep A. So the nurse does the first shot (HIB) and Fuzz doesn't even flinch. No tears, no whining, nothing. Then she does the Hep A. Again, needle goes in, Fuzz doesn't flinch. Meds go in and she screams. I told the nurse about her previous reaction and she looks at me with wide eyes and goes "Nobody told me that!" with sympathy in her voice. I was about two seconds away from bursting into tears.

The doctor never said anything!

Yet, I'm mad at myself because I'm the mama, I should have advocated better on her behalf. I should have made sure the nurse knew about the reaction.

On Saturday morning we went to the soccer game of my friend's son. He's in the 3-4 year old age group and it was awesome! We can't wait until we can sign Fuzz up. They were so stinkin' cute running around.

Howerver, they were also: kicking it in the other team's goal, running off to pick clover, and crying when someone kicked the ball away from them. I give those coaches a lot of credit. I know it's just for fun at this age, to give them the spark that could turn into a love for the game, but I'm pretty competitive, and I just don't think I could do it.

You can bet I'll be cheering my heart out for Fuzz on the sideline though! 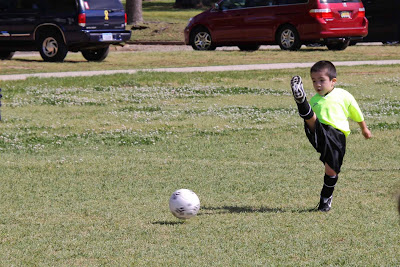 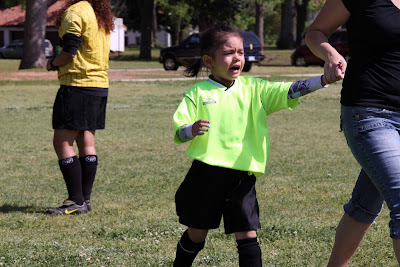 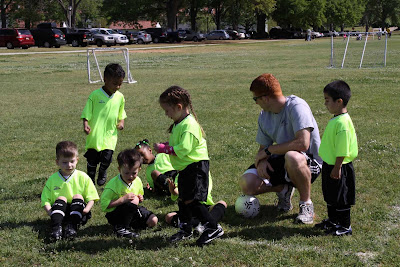 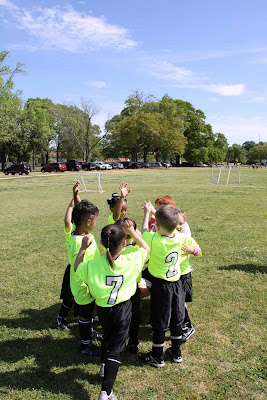 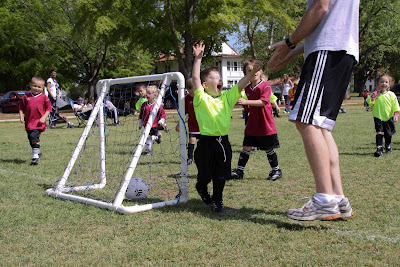 I have bike butt

For Valentine's Day, I got a bike. I haven't had a bike of my own since, oh I don't know, middle school? It's fun to get out and bike with my little family.
However.
The hills around here are insane. Definitely not a good place to be getting back into biking. By the time we get home my legs feel like jello and I pretty much collapse on the floor.

Fuzz would love a little baby in our house. Two of our friends here have little ones and it has been a joy to watch her be a little mommy. Stryker and I both have the itch, but the timing isn't ideal, which ultimately just makes us want another one more I think.

Friday, I had a newborn photo shoot, and let me tell you, I fell in love. I could photograph newborn babies all day long. So innocent, so tiny, so squeaky. I forgot about those little baby squeaks.

During the dreaded first trimester of her pregnancy, Sara and I were talking about how much it sucked and how people say you forget about it. Let me tell you something. I haven't forgotten. One of the sole reasons having another baby right now makes me squirmish is because I just really don't want to be pregnant again. I had a horrible first trimester, and I didn't forget. I told Stryker multiple times during pregnancy, "I'm sorry, I know you want two, but it's not happening."

"Why would anyone have a second child?" I wondered.

I figured it out about the time Fuzz turned two. Stryker had been back for a few months, so all the responsibility of raising her wasn't falling on me anymore. Fuzz was doing and saying new things every day. I was able to sit back and enjoy her, and I was falling deeper in love than I ever thought possible. My daughter is hilarious, sweet, kind, and beautiful. That is why people have second (third, fourth...) babies. They get to that special age and just become so much fun. And then the itch begins. At least that's how it happened for me.

Lord willing we will have another baby. I'm just not sure when.

Labels: being a parent, Fuzz

Sometimes
it's just fun
to feel the wind
in your hair. 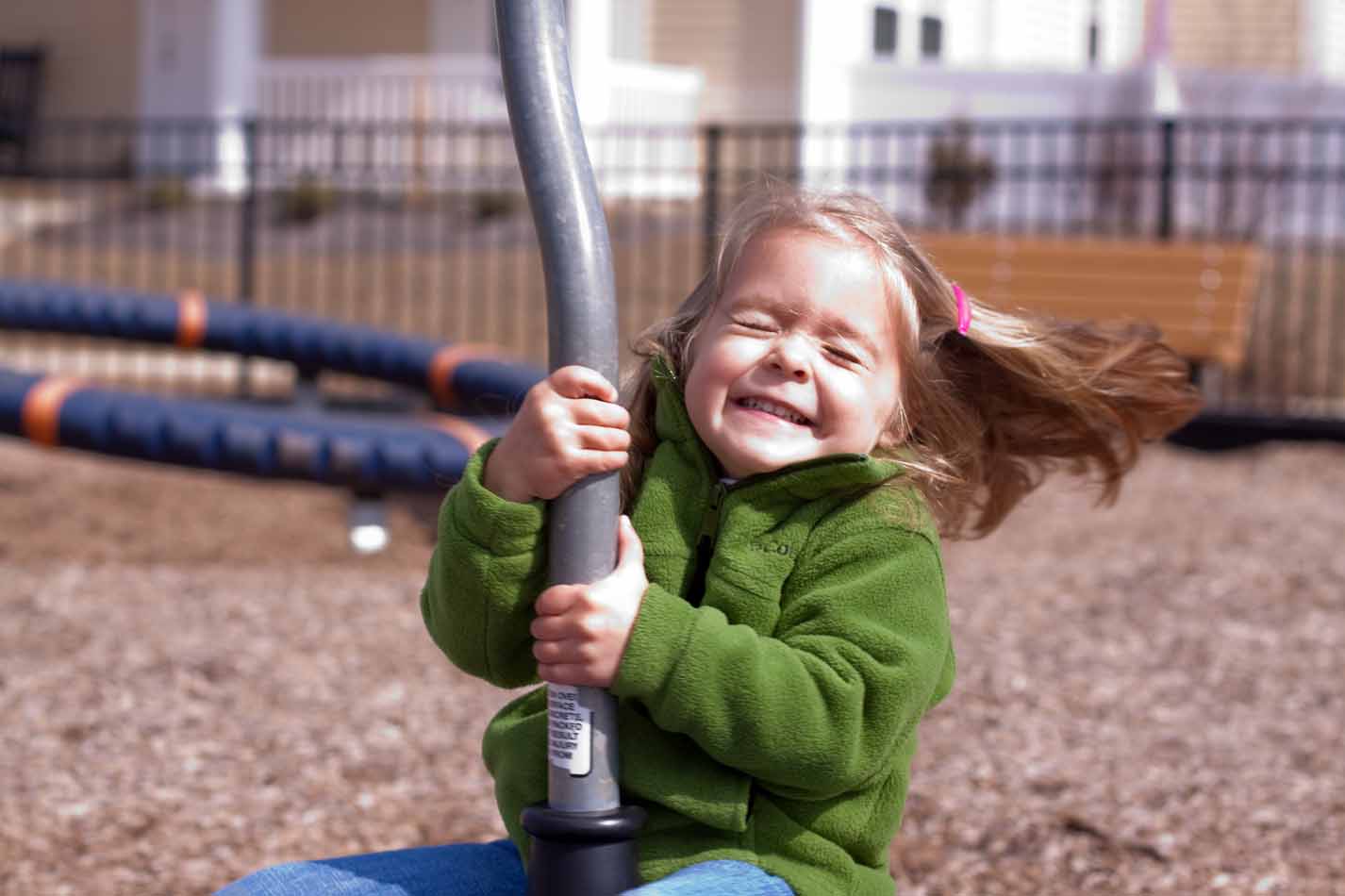 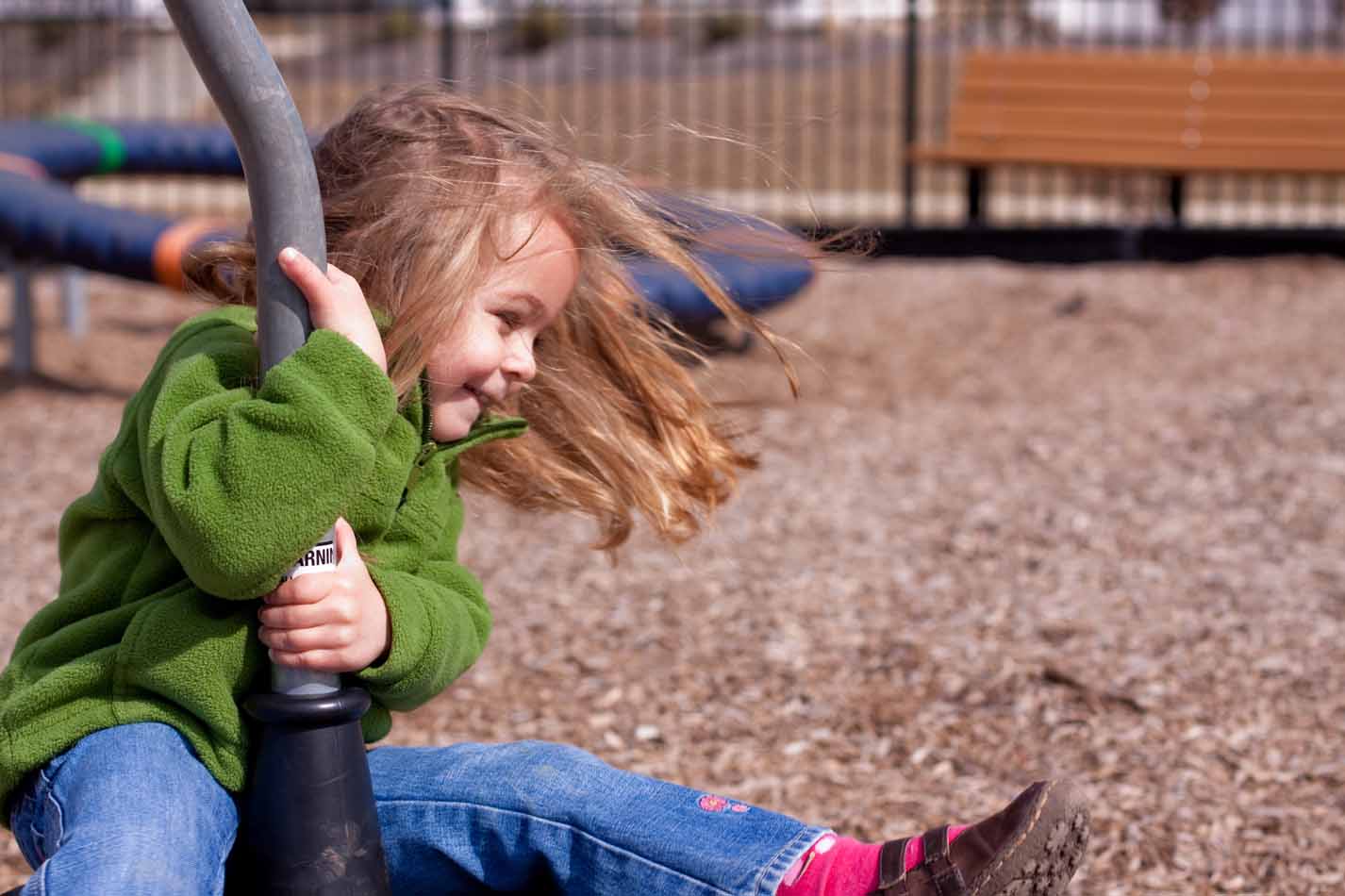 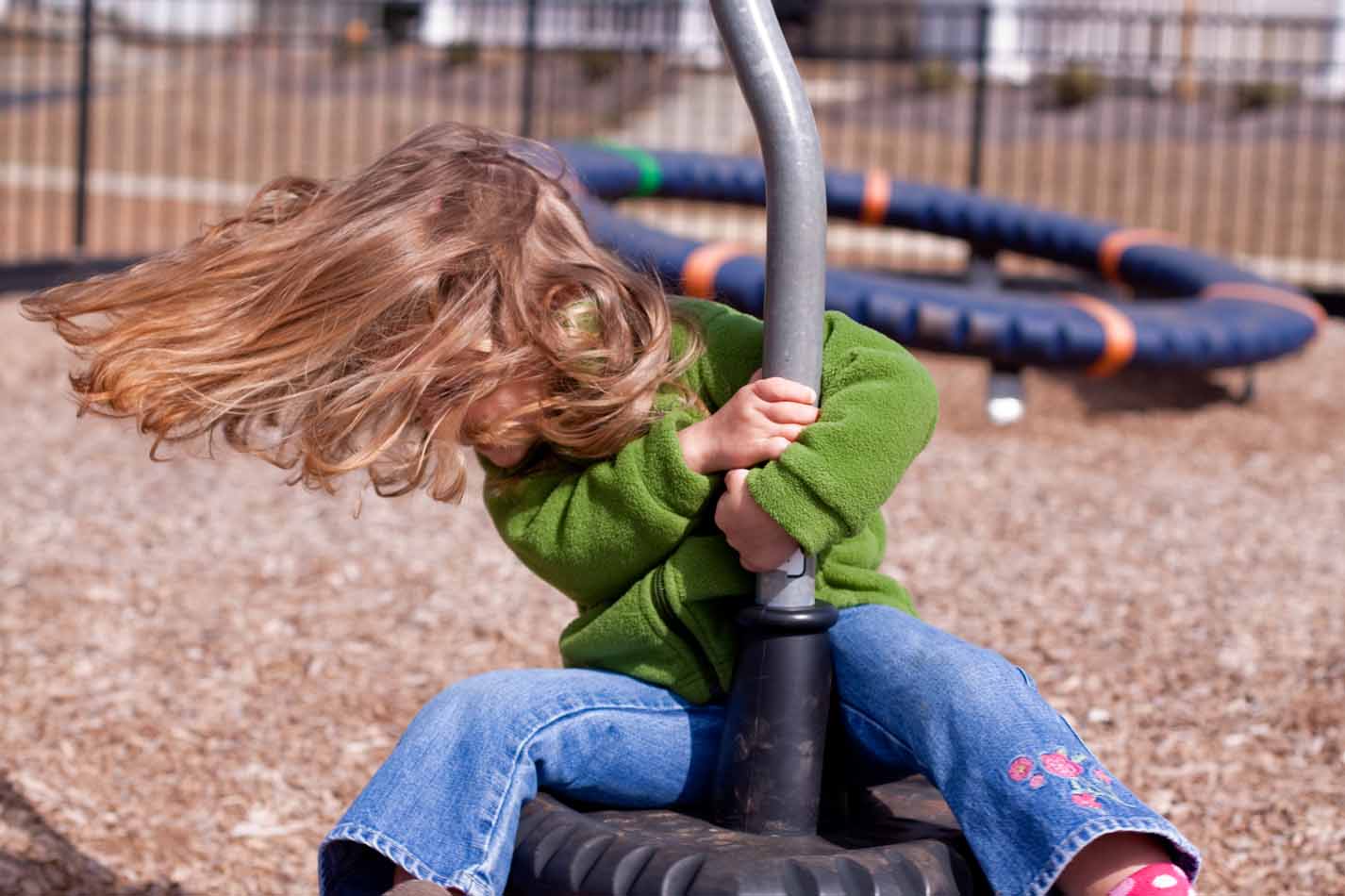 Cross posted from my photo blog.

Wow, thanks for all the support about photographing the wedding. I had no idea that people were still keeping tabs on this blog. It had been such a long time since I had posted, it kind of seemed like I fell off the radar. Hopefully I can get into some kind of habit here again. It's a great outlet with a lot of friends and I've missed it!

Today, Fuzz and I are going to go grocery shopping and play outside. It's been just gorgeous here lately. T-shirts in November? That's my kind of winter! Although I am a big fan of curling up in a cozy sweater too.

Carissa
After spending over five years living where the Army told us to, we are finally back in our home state living as civilians again. We are thrilled to be closer to our families and starting our new adventure!